Captain of Battery D Succeeded in Winning Approval of His Men

It was June 14, 1905, when Harry S. Truman, a 21-year-old bank clerk, enlisted in the (then) Light Battery B of the National Guard. This was Truman's first military experience but he would find many years of interest and service in the military. He continued as a member of the National Guard until war was declared in 1917. 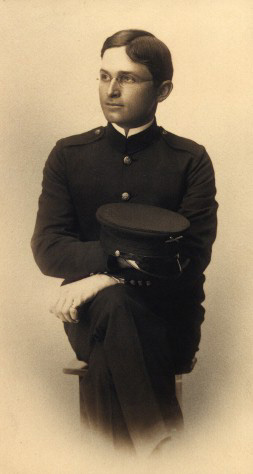 In organizing the regiment, Independence furnished three of the batteries, "C," "E" and "F." The 129th Field Artillery Battalion was commanded by Major John Miles. All men for the three batteries were recruited from the Independence area. The organizational procedure was that officers were elected by members of their organizations. The officers then elected staff members. 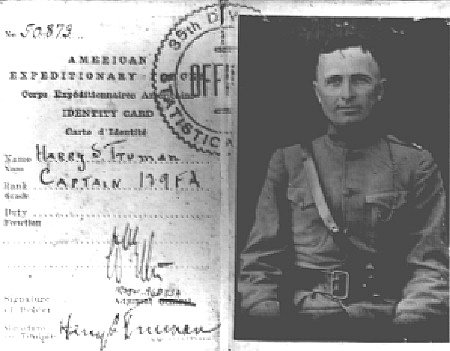 Because of his 12 years of experience, Mr. Truman was elected as first lieutenant of Battery "F" when it was organized on May 22, 1917. He said at the time he felt he was well qualified to be a section sergeant; however, when he found himself a lieutenant, he knew be had a tremendous amount of work to do to become familiar with his new job. 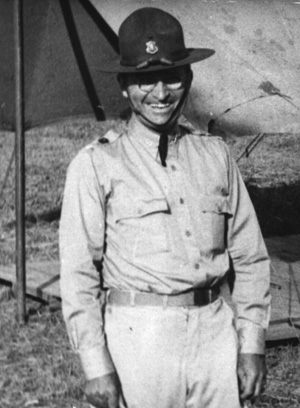 Prior to their service in World War I, many members of old Battery C saw service on the Mexican Border. Associations and friendships formed during this service lasted many years. Training after border service continued in Kansas City near the Convention Hall and on the streets of Kansas City and Independence. All were sworn in to federal service on Aug. 5, 1917, as members of the 129th Field Artillery, 35th Division.

When they entrained Sept.16, 1917, for Camp Doniphan at Fort Sill, Oklahoma, many married men were accompanied by their wives. Among those were Mary Bostian who went with her husband, Kenneth; Laura and Spencer Salisbury; Anna Hinde accompanied Edgar; Pete Allen's wife was there also and my mother accompanied my father.

The married women found limited quarters in Lawton, Oklahoma., and when leave was available, socializing and visiting was done in Lawton. There also was horseback riding and dinners at the fort.

Attendance at the Fort Sill School of Fire brought instruction in equitation (for the regiment was horse drawn) and in use and firing of 75 millimeter cannons. 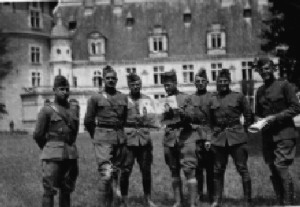 Mr. Truman and C.C. Bundschu were just two of the "singles" in the group, but they were still part of the Independence contingent. They said the dust was so deep, so prevalent, that when a man made a trip into Lawton and returned~to the fort, he might receive the "water treatment" before being allowed back into camp.

Mr. Truman was made regimental canteen officer and, knowing that a soldier of his acquaintance had had some experience in merchandising, he selected Eddie Jacobson to assist him in the operation of the canteen.

The canteen was a great success; and after $2 had been collected from each man to purchase supplies, it took only six months for the $2,200 to be refunded to the men. It was announced that a dividend of $1,500 had been accumulated. This, of course, was the beginning of a relationship that resulted in the haberdashery partnership in Kansas City after the war.

In February 1918, Mr. Truman was selected for overseas school detail and he boarded the train March 20 to report for duty. At 4 a.m. the next day, the train arrived in the Rosedale, Kan., switch yards and Mr. Truman frantically searched for a telephone to call his fiancee and family to tell them he was going overseas. Mr. Truman said a switchman gave him permission to use a telephone but admonished him that if he called a young lady at 4 o'clock in the morning and she didn't break the engagement, it was surely a sign that she loved him.

Arriving in New York, he was given a 24 hour leave before being shipped out of the country. One thing he felt compelled to do was to add to his supply of spectacles, for he felt almost blind without them. Finding a source for three pairs, he found the salesman refused payment, saying he was being adequately repaid by having the young lieutenant going overseas to serve his country.

Lieutenant Truman arrived in France and was assigned to the 2nd Corps Field Artillery School at Montigny-sur-Aube. He was promoted to captain on April 23 and on July 4 he rejoined his regiment.

Truman later wrote that he did not know he was a captain until October, although he had seen a brief notice regarding overseas promotions in an old New York Times earlier in May. But official notice of his promotion did not reach him until October. And when he made a claim for back pay, it was refused because he had not accepted his commission at an earlier date.

On July 11 he was put in command of Battery "D" of the 129th Field Artillery. This battery was a Kansas City organized unit and included many Irish and German Catholics. It was said to be a burly group and Captain Truman said he felt he would have to try very hard to gain their acceptance and approval. He won their confidence and their support; they later presented their captain with a loving cup as a token of their respect.

His battlefield experiences are well documented in his Memoirs. Front line activities for Battery "D" continued from Sept. 6 until armistice, Nov.11,1918.

A leave in December 1918 allowed Captain Truman three days in Paris, a trip to Nice and a visit to the Casino in Monte Carlo, all of which he recorded were very happy days. After a year and 20 days of service overseas, he was scheduled to embark on the German passenger ship, Zeppelin, on April 9, 1919. And after a sea voyage of 11 days, he arrived in New York on April 20.

The trip from New York to Camp Funston, Kansas, took only a few more days. On May 6, 1919, he was discharged. When the war was over and he had returned to New York, Mr. Truman said, "If Old Lady Liberty in New York Harbor wants to see me again, she will have to turn around."

The war was over but war friendships continued. Ted Marks was from Kansas City and in charge of another battery in the 129th Field Artillery. He remained in the Reserve Corps many years with Mr. Truman.

Powell Cook and my father soon started their business and Cook & Sermon Grocery was a regular visiting place for war buddies and friends. When it later became Judge Truman and Mayor Sermon, it was also a "politicians' meeting place."