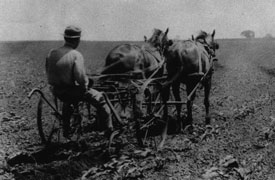 Truman's White House staff was much less devoted than the staffs of more recent Presidents to creating a complete audiovisual record of their presidency. There was not even a White House photographer during Truman's term of office, and many events - particularly the myriad of ceremonial occasions that fill many of a President's days and that today are routinely photographed - went unrecorded by camera or microphone.

Whereas a late 20th century Presidency will probably produce over a million photographs, fewer than 50,000 photographs were produced by the Truman administration - primarily by the Army, Navy, and Interior Departments - and retained in the White House files as a record of the President's activities. Motion picture films and sound recordings were produced in similarly modest numbers during the Truman administration. 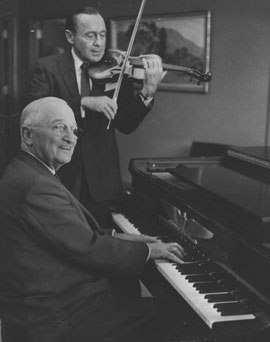 The White House photograph collection which came to the library as part of President Truman's donation was only about half composed of government-produced photographs. The rest, which were apparently given to the White House as a courtesy, were taken by wire services, newspapers and other private companies and organizations.

The Truman Library has nonetheless assembled an extensive audiovisual collection over the years. Thousands of additional photographs and other audiovisual materials have come to the library as part of the more than 400 donations of personal papers that have arrived over the years. The result of the library's collecting efforts is an audiovisual collection that includes over 180,000 photographs, 800 motion picture films, and over 5,000 sound recordings.

The still photograph collection is the most diverse of the three main parts of the audiovisual holdings. Most of the significant events of Truman's Presidency are of course represented, but Truman's early life is depicted too, as well as his long, active retirement. The collection also includes significant numbers of photographs relating to World Wars I and II and the Korean war and to the lives and careers of many of Truman's friends and associates.

The Harry S. Truman Library slide collection consists of original 35mm and 35mm stereo slides that individuals, including the Library's photographers, have donated to the Library, often as part of photograph and manuscript collections. Some of the slides came to us from the Truman home. We have over 2,700 slides in the collection. Selected images of President Truman and other members of the Truman family have been duplicated in the photograph collection; these slides are noted in both the photo and slide descriptions.

The slide collection consists primarily of images of the Harry S. Truman Library exhibits and events. The Truman funeral, the painting of the Thomas Hart Benton mural, the signing of the Medicare Bill, and visits of President Lyndon B. Johnson are among the events documented in the slide collection. We also have slides relating to the travels of Margaret Truman and Harry S. Truman, especially to Europe and Hawaii. There are images from the presidential years of the 1940's, especially relating to the White House and Margaret's trips to Europe in the early 1950's. Most of the images, however, show post presidential activities, including former President Truman's talks to students at the Truman Library. The slide collection is available for research at the Truman Library; images are not available online at this time. Researchers may order digital copies and photographic prints of the slides.

The motion picture collection, which is for the most part in 16mm format, includes newsreel footage, documentaries, television programs on which Truman appeared, and a few home movies. Films of President Truman giving speeches and performing the other official and ceremonial duties of his office form the core of the collection. Only about 7 percent of the total of the library's motion picture holdings was produced by the government. The rest was taken by newsreel companies and other private producers. Only a few of Truman's speeches were filmed in their entirety; more common was the filming of short segments for use in newsreels, or at least only these segments survived on film. A particularly notable documentary in the collection is the 26 part television production, Decision: The Conflicts of Harry S. Truman, produced by Columbia Pictures in 1964. Subject and chronological indexes to the film collection and detailed film descriptions with scene by scene identification are available in the audiovisual research room. SD-quality copies of already digitized motion pictures are available for $20, and HD-quality copies of already digitized motion pictures are $50. Copies of motion pictures not already digitized will incur additional costs. To order motion pictures, please call the audiovisual archives at 816-268-8228.

The videotape collection guide documents items in the Harry S. Truman Library that are originally in videotape format (such as U-Matic, VHS, and digital video formats). Many of these items were donated to the Library, purchased by the Library, or created by the Library. The collection dates from the 1970's to the present. The types of material in this collection includes commercially produced videos, home videos relating to Harry S. Truman or the Truman Library, videos of media reports on the Truman Library, recordings of off-air productions, and originally produced Truman Library programs and events. There are over 800 videos in this collection. Many have copyright restrictions. The videotapes do not circulate but reproductions may be purchased. Please note that this is a different videotape collection than the items available to be borrowed by teachers, from our Education Department. 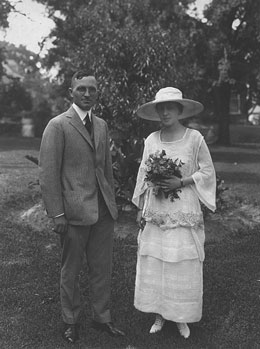 The main series of sound recordings in the audiovisual collection comprises over 900 of speeches and remarks of Harry S. Truman, dating from 1934 to 1968. Most of these recordings were made by the Army Signal Corps on 16-inch discs. The finding aid to these recordings is available online.

One other large collection within the Library's audiovisual holdings is the Screen Gems Collection which consists of outtakes created during the production of the film series, Decision: The Conflicts of Harry S. Truman. Material ranges from informal interviews with Truman, members of his family, and associates, to more formal, scripted readings by Truman. The subject matter includes Truman's personal life as well as his decisions as president. Sound recordings comprise about 90% of the collection with the remainder being film.

The library also has over seven hours of tape recorded interviews author Merle Miller conducted with Truman in 1961-62 as background for his oral biography, Plain Speaking. The finding aid to that collection is available online.

Other recordings include the voices of Winston Churchill, George Marshall, Dean Acheson, Alben Barkley, Eleanor Roosevelt, H. V. Kaltenborn, and Helen Gahagan Douglas. Most of the recordings have been transferred to reel-to-reel tape for reference use. Digital copies of sound recordings can be purchased for $20. To order sound recordings, please call the audiovisual archives at 816-268-8228.

A chronological listing of all of the library's recordings of Truman's voice is available in the audiovisual research room, as are subject and chronological indexes to the sound recording collection. The library can provide reproductions of any of the items in the audiovisual collection. Many of these items, however, are protected by copyright, the consequences of which for the making of copies differs for different media.

Please send an email to truman.reference@nara.gov for further information regarding all audiovisual collections.