The Challenge of International Aid 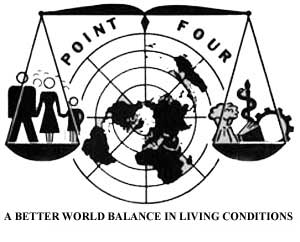 On a frosty January 20th, 1949, after a dramatic re-election campaign, President Harry S. Truman delivered his Second Inaugural Address. In this speech, Truman described his foreign policy goals in four direct points. The fourth point, which has become known as the Point Four Program, took the country by surprise. This fourth point declared that the United States would “embark on a bold new program for making the benefits of our scientific advances and industrial progress available for the improvement and growth of underdeveloped areas.”

Truman’s Point Four proposal, along with the much larger Marshall Plan, would not be a totally new idea. What was new was how Truman made a connection between foreign aid and freedom.

In 1949 the need for American aid in the world was great. European and Asian nations were still recovering from the destruction left behind by WWII. Other areas in the Middle East, Africa, and Asia were gaining their independence after centuries of control by European countries. Harry Truman knew that when people struggle and suffer they are more likely to be dominated by stronger powers. He also knew that United States was the only country in the world in a position to help.

Everyone in the audience understood the context of Truman’s speech. In 1949 the United States was locked in a competition with the Soviet Union for influence in the world. When Harry spoke of oppressors, he was talking about that country’s efforts to spread communism. Since WWII the United States had been unable to stop the Soviet Union from dominating Eastern Europe. Americans were afraid that other struggling countries would experience a similar fate.

One way Truman hoped to combat this threat was to aid the underdeveloped parts of the world. This aid would come, not in the form of money, but by spreading knowledge and expertise. Instead of giving food, the US would help develop farms. “More food, more clothing, more materials for housing, and more mechanical power…” Helping countries take care of themselves, it was felt, would be the best way to ensure they find “prosperity and peace”.

While the idea was instantly popular, it turned out that providing international aid is a tricky business. Agencies created by Congress sent technicians to countries around the world to work on specific projects. Unfortunately, by 1952, officials were still hoping to have a few pilot programs in place to highlight the potential impact of Truman’s proposal. Today, decades later, 1.3 billion people live in extreme poverty. The world still struggles with ways to make a difference in these people’s lives.

Why is providing International Aid harder than it sounds?

Dear Bess
Decision to Drop the Atomic Bomb
Establishment of the CIA
Harry S. Truman and Civil Rights
House Un-American Activities Committee
How is the current debate about immigration in the United States rooted in our nation’s past?
How much Power does a President actually have?
Immigration in Post-War America
Invasion of Manchuria
Is control of nuclear weapons necessary to maintain peace?
Japanese-American Internment
Justice at Nuremberg
Presidential Leadership
Recognition of Israel
Steel Strike of 1952
The Blockade of Berlin
The Challenge of International Aid
The Challenge of National Healthcare
The Election of 1948
<div cla