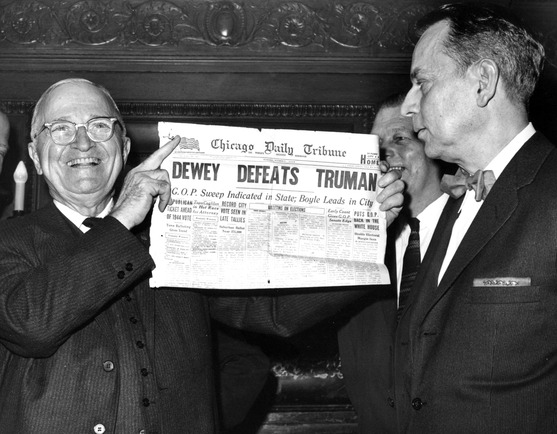 In early 1948, Harry Truman prepared to run for President in his own right. Few people gave him any chance of reaching his goal. The economic difficulties of reconversion and popular perceptions of him as unrefined and blunt had hurt his popularity. His inconsistencies on the Palestine issue contributed to a sense that he wasn’t up to his job. The Republican Congress had rejected almost all of his proposals for domestic reform. And it wasn’t yet clear that his foreign policy initiatives in Europe would succeed.

To make matters worse, support within his own party was disintegrating. Southern Democrats became enraged when he began supporting civil rights for African Americans. Led by South Carolina governor (and later U.S. Senator) Strom Thurmond, the Southerners broke away and established the States’ Rights Party, also known as the “Dixiecrat” faction. Truman was attacked by the left wing of his party because of his policy towards the Soviets, which they regarded as aggressive and provocative. Franklin Roosevelt’s former Vice President Henry Wallace and his followers established the Progressive Party.

Down in the polls and under fire within his own party, Truman alone remained confident of his victory. On the morning after the election, Americans rose to news of the most surprising comeback in presidential election history. In Missouri, Truman learned of his victory at 4:00am, when a Secret Service agent woke him. Later that day 40,000 people jammed the town square in Independence to salute their native son.

How did he do it? The election was a cliffhanger; the President won without getting a majority of the popular vote, pulling together just enough of the old New Deal coalition to squeak through. His civil rights program attracted black and liberal voters. Farmers rewarded his backing of price supports and other benefits. Labor backed his attacks on the Republican’s anti-union record. Urban machines delivered the cities. And despite the defection of the “Dixiecrats,” he still held on to several Southern states. Truman’s upset was the highlight of a Democratic sweep, as the party won back control of Congress as well.

What was the biggest factor in President Truman successfully winning the election of 1948? Was it due to his campaign strategy, the failure of his opposition, or public support for his actions of 1948?

1948 Campaign Lesson Procedures and Goals (opens in a new window)