How is the current debate about immigration in the United States rooted in our nation’s past? 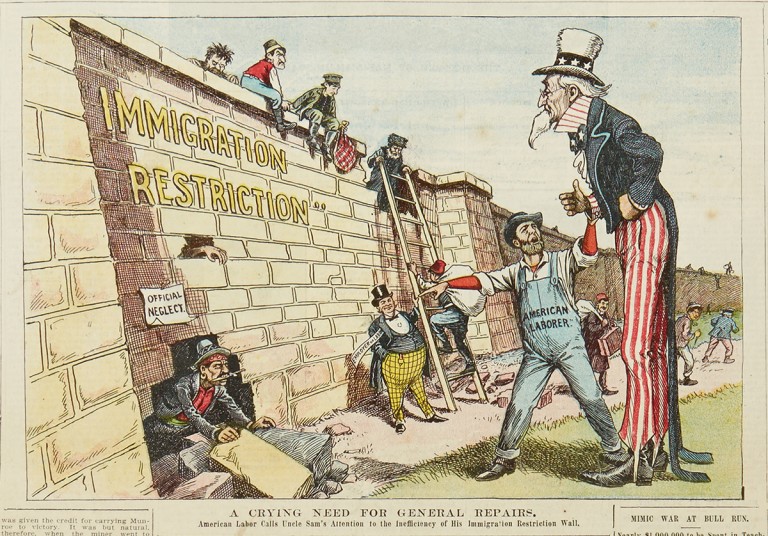 Harry S. Truman became President of the United States on April 12, 1945. Not only was Truman struggling with World War II and the creation of the Atomic Bomb abroad, he was facing a multitude of issues within the United States.

After World War II, many of the policies Truman put in place would shape the face of America. World War II destroyed the lives of millions of Europeans and Truman felt sympathetic towards their need. Truman wanted to ensure that America would welcome them with open arms, but the public often held a different opinion. American farmers were also facing a labor shortage and desired a large supply of cheap labor. This was difficult to find and many farmers suffered.

Throughout the early 1900s, America faced an increase in illegal immigrants coming from Mexico. Farmers would hire contracted immigrants to work on their farms. Many citizens viewed the immigration issue purely as an agricultural problem. Farmers desired cheap labor to work their farms, but the public wanted the removal of illegal aliens entering from Mexico. Others wanted to ensure that those individuals who obtained citizenship would receive proper care as new US citizens. The Bracero Program established a guideline for farmers wanting to hire contracted workers.

On June 3, 1950, Truman issued an executive order and started the President’s Commission on Migratory Labor. This group was tasked with researching the issues associated with migratory workers. Their final task was to create and recommend policies to deal with the issue of illegal immigration.

In 1951, Congress passed the Public Law 78 Act, also known as the Ellender-Poage Bill, which allowed the government to transport contracted workers from Mexico to American farms for a simple $15 transportation fee. Large agricultural farmers supported the passage of the bill, while laborers protested the bill. President Truman received thousands of telegrams from US citizens urging him to veto or pass the bill. Faced with such opposition during the final years of his term, Truman was pitted against Congress; Congress was for the use of migrant workers while Truman opposed the continuance of migrant worker immigration. Ultimately, Truman continued the use of contracted migrant workers from Mexico.

Between 1942 and 1964, it is estimated that 4.6 million Mexicans entered the states legally through the Bracero Program. Southern states such as California became reliant on migrant workers. Presidents after Truman have dealt with issues regarding illegal immigration and immigrants. President Eisenhower enacted an operation to forcibly remove and relocate 1.3 million illegal Mexican immigrants back to Mexico.

These acts raise the question, How has the argument over immigration evolved throughout America’s history?

Note: Many historical documents in this lesson include the word “wetback”.  In these sources we have chosen to let this word remain as it originally appears without any substitution.  The term holds dehumanizing power and these documents demonstrate the ease with which some Americans used it to describe fellow human beings.

How is the current debate about immigration in the United States rooted in our nation’s past?