The Firing of MacArthur 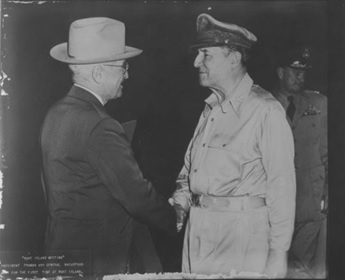 In 1945, the scars of World War II across the world were still fresh. The fear of having to engage in another world war was very real. A mere two years after the end of WWII, the Cold War began. The United Nations, which was formed to provide a forum to prevent future wars, included the membership of the Soviet Union, the United States, the United Kingdom and 57 other countries. The US adopted a firm stance to contain the spread of communism, which was being aggressively promoted by the USSR.

The Korean War began when the North Korean People’s Army (NKPA) crossed the 38th parallel into South Korea. Adhering to its policy of containment, the United States could not ignore the threat of communism in Asia, but neither the president nor the public wanted a long, drawn out war. President Truman hand selected General Douglas MacArthur to lead the U.S. troops in South Korea. MacArthur arrived at his post a World War II hero, having successfully led multiple troops through the war. Following his victories in WWII he had become the Supreme Commander for the Allied Powers in Japan. MacArthur was revered and highly praised in the United States.

The general assured the president that the Korean War would be short-lived and that the American troops would be home by Christmas. MacArthur was initially successful in driving back the North Korean forces over the 38th parallel. He made a controversial move, however, when he continued to push the North Koreans further north and suggested bombing cities in China that were thought to be aiding the North Korean troops. In pushing for a larger conflict, MacArthur downplayed the risk of inciting a massive war in Asia.

President Truman’s main concern was saving as many lives as possible, even if that meant signing a ceasefire along the 38th parallel. General MacArthur did not think a ceasefire was an appropriate solution. The two men clashed. For Truman, the war represented an opportunity to stop the spread of communism into South Korea. For MacArthur, the war was an opportunity to liberate the North from communist control, and aggressive action was required.

MacArthur thwarted Truman’s attempt to negotiate a ceasefire when the general ordered his troops to invade North Korea and push the NKPA up past the 38th parallel. This was not the first time the general had ignored direct orders from his Commander in Chief. On April 11, 1951, President Truman officially relieved Douglas MacArthur of his command. Word of his firing spread quickly, and the American public found the news upsetting. Truman felt that his decision was just because MacArthur had overstepped his authority, defied direct orders from his superior and interfered with Truman’s hope of ending the Korean War quickly.

Would you have fired General MacArthur?

MacArthur Lesson Procedures and Goals (opens in a new window)

Dear Bess
Decision to Drop the Atomic Bomb
Establishment of the CIA
Harry S. Truman and Civil Rights
House Un-American Activities Committee
How is the current debate about immigration in the United States rooted in our nation’s past?
How much Power does a President actually have?
Immigration in Post-War America
Invasion of Manchuria
Is control of nuclear weapons necessary to maintain peace?
Japanese-American Internment
Justice at Nuremberg
Presidential Leadership
Recognition of Israel
Steel Strike of 1952
The Blockade of Berlin
<div