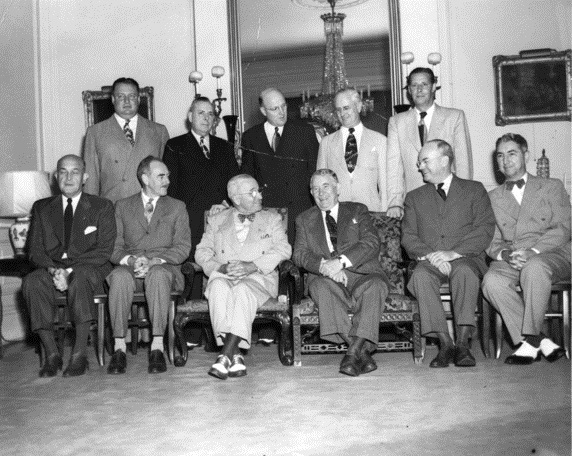 When Franklin Delano Roosevelt died of a cerebral hemorrhage on April 12, 1945, Harry Truman took over a government that had grown exponentially through years of New Deal programs and efforts to win World War II. By some accounts FDR had struggled to coordinate this massive growth by being personally involved in decision-making and paying little attention to his cabinet. “He allowed everything to sprawl and then tried to control and manipulate the jumble—or jungle—in complicated ways.”1 Dean Acheson, who served as FDR’s Assistant Secretary of State and later as Truman’s Chief Diplomat, agreed: “… he was tone deaf to the subtle nuances of civil government organization. This was messed up in his administration for the simplest of reasons: he did not know any better.”2 In hindsight it makes sense that building a bureaucracy in the midst of crisis was not a simple task.

Harry Truman brought to the presidency a background that made him uniquely capable to address this bureaucracy problem. Early in his political career Truman served as the Judge of Eastern Jackson County, Missouri. This position required Truman to develop skills as an administrator, and it was in this capacity that he established his passion for efficient government. Truman was proud of his ability to deliver projects “on time and under budget.” During World War II Senator Truman had developed a reputation for efficiency and accountability through the Truman Committee. Officially known as the Senate Special Activity to Investigate the National Defense Program, this was Truman’s opportunity to make a name for himself by working to uncover waste and fraud in the industry.

Upon assuming the presidency, Truman struggled in his relationships with FDR’s former cabinet members and aides. At first he kept the former Cabinet members on, allowing for continuity during a time of war. Conflicts quickly emerged, and Truman began replacing members. Within three months of taking office, Truman had retired six of the ten Roosevelt department heads. Where he had concerns about loyalty, attitude or competence, Truman had no problem taking swift action. This explains how he went through 24 different department heads during his seven years as president. Sometimes these firings appeared to be done with a lack of tact on Truman’s part, which created tension with his subordinates. On the other hand, many found Truman to be very easy to work with because they knew where he stood on the issues: he considered himself “the boss,” no matter what.

During his time in office Truman took steps to establish order on the government apparatus that surrounded him. His passion for an efficient government led him to call for a reorganization of the executive branch. Truman’s personal interactions with his cabinet resulted in life-long friendships and public confrontations. By looking at the perspectives of several individuals who worked with Truman during this time, we get a chance to glimpse first-hand the characteristics that defined Truman as a leader. Those interactions reveal both the inner workings of the Truman administration as well as the personal characteristics that shaped his presidency.

How does a president’s leadership style shape the government?

Dear Bess
Decision to Drop the Atomic Bomb
Establishment of the CIA
Harry S. Truman and Civil Rights
House Un-American Activities Committee
How is the current debate about immigration in the United States rooted in our nation’s past?
How much Power does a President actually have?
Immigration in Post-War America
<div class="views-field views-field-ti